Hashtags are getting bigger than ever! Have you heard about the deal between Twitter and Google? If you haven’t, you’ll want to google that. An important aspect of digital marketing is growing your audience. Hashtags can help you do just that.

So What’s a Hashtag Anyway?

Essentially, a hashtag is any string of characters preceded by a pound sign. The only rule is that it can’t have spaces.

Chris Messina (former Google UX Designer) proposed the concept of hashtags in 2007, in a famous tweet.

Like many good ideas, it got rejected until someone important saw the wisdom behind the concept. In 2009, Twitter made hashtagged keywords a hyperlink. Now, clicking the hashtag brings you to a stream of all tweets containing the hashtag.

Essentially, think of it as another keyword or subject related to a post/tweet. AKA, another piece of metadata. It’s data about data.

If you make a post about optimizing your AdWords account, adding #adwords to your tweet will increase the number of people that can see the post. You may even want to add another related hashtag like #SEO, #PPC, or #marketing. However, be careful because you can accidentally overdo it.

According to Buddy Media (Acquired by Salesforce) hashtags work best when you place one or two of them in a post. They measured a 21% higher rate of engagement on those posts. Conversely, they measured a decrease of 17% in engagement when you use more than two. So don’t overdo it! (I don’t want to stifle your creativity but maybe stop at three… maybe).

To start, grouping messages by context is always conducive to analysis. You can use a free service such as Ritetag to measure the popularity of hashtags. Here are some questions that Ritetag can help you answer about all the tweets that contain a certain hashtag.

In addition, you will see a percentage that describes the content in this subset of tweets.

© Based on Best hashtags for analytics calculated by

Additionally, Ritetag helps by showing you the trend graph for the hashtag. This gives you an idea of stats over time. The three graphs below describe different trends for the selected hashtag. 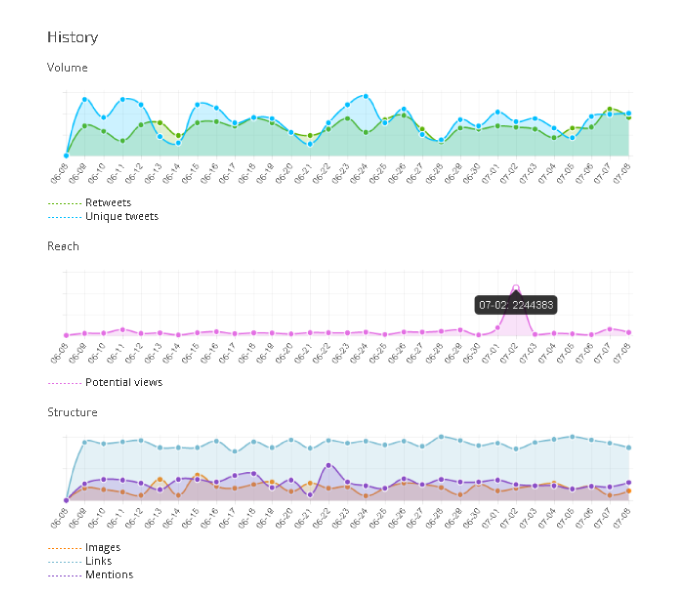 Ritetag offers many features beyond that though, so it is worth checking out. There are many reasons why hashtags help brands gather feedback

Additionally, you should check out the RiteTag Chrome App which integrates well with social sharing platforms such as HootSuite and Buffer. These social sharing platforms help with scheduling your tweets/posts and much, much, more. Let’s say I come across an article about finance and I want to schedule it to be shared on my social accounts. Here is an example of the way the Chrome App integrates with Buffer.

The stats that we found on the RiteTag site are now easily viewed in the Buffer post creator that pops up when you use the Buffer Chrome App to share the page you are currently on. This enables you to do many things very quickly.

Here is a video demonstrating how to set up and use Buffer and RiteTag.

Use RiteTag to add hashtags intelligently. Use Buffer to schedule tweets. Learn about RiteTag integrations with Buffer that makes Mentions, Images, Hashtags, URL Shortening and much more a breeze.