What is Bitcoin? How does it Work?

We’ll start on the What first. Bitcoin is the most popular form of “cryptocurrency” orbiting the Internet, lauded as a groundbreaking and international medium of exchange.

Bitcoin debuted in 2009 and can be summed up as a decentralized online payment system that uses computer science cryptography.

This complex system acts as a central authority and controls the creation of currency and stored records of transactions.

It’s backed up by a peer-to-peer (P2P) computing network, which distributes workload across an international network of users who help verify, or “mine” these public ledgers through arduous computational algorithms as a means to enhance security and keep the system running efficiently. 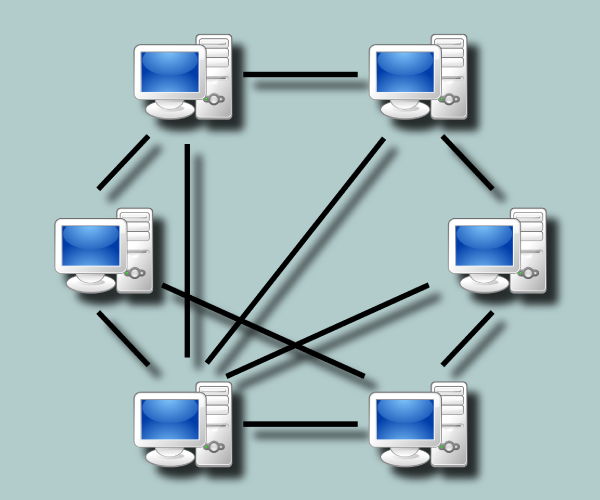 In a P2P network, there is no central authority verifying or mediating transactions. Therefore, authority is spread evenly across users in the network.

The How of Bitcoin

Bitcoin runs on open-source code, meaning that anyone can access and review the Bitcoin sourcecode at any time.

This code includes records of transactions organized into a public ledger called the blockchain.

Miners use specialized hardware to help process and verify this public ledger. In exchange, they get the transaction fees associated with that block, as well as a small reward of Bitcoins.

Due to the rewards for supporting the network, Bitcoin mining is extremely competitive. Currently, the bounty for processing a transaction, or “discovering” a block is 25 Bitcoins. This prize is split in half every 210,000 transactions.

Complex protocols like these are cryptographically enforced to ensure that new Bitcoins are added to meet and maintain the growing economic system without disrupting overall economic stability. 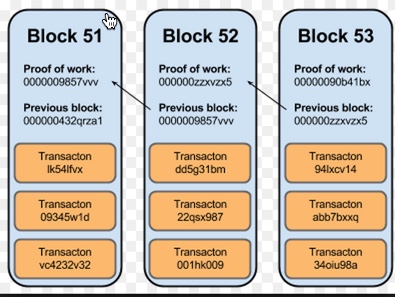 (ybrikman.com) Blocks are public ledgers that are “mined” and verified by users in exchange for transaction fees and Bitcoin rewards. Each new block verifies both past as well as present transactions.

In short, Bitcoin is a worldwide, decentralized, and collectively reinforced digital currency where no single user is powerful enough to disrupt the entire network.

Here is a real-time updating widget embedded into this site for the current price of Bitcoins.

Here is another widget, but this one pays me for hosting it. Click the link to learn about hosting it on your site.

Last time I checked this real-time update, these two widgets show different Bitcoin value. Do you know which one is correct?

Last I checked, the second one was closer to the one reported by the Google Knowledge Graph (Type Bitcoin value into Google).

Bitcoin is still in its infancy and is incredibly volatile, meaning the daily value of a Bitcoin is highly prone to fluctuate—sometimes by hundreds of dollars. That being said, it’s still the most reliable and well-financed of all cryptocurrencies. You can learn more about Bitcoin volatility metrics at the BitCoin Volatility Index.

Since more people use and recognize Bitcoin today than in 2009, it’s value has become more stable. However, the “market cap”—or the value of a single Bitcoin multiplied by the number of Bitcoins in existence—is still relatively small.

This means that any significant changes in supply and demand can alter the value of the Bitcoins in your digital wallet. 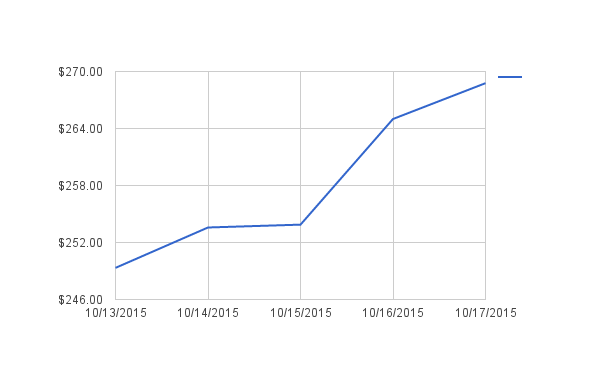 This graph shows the volatile and equity-like nature of Bitcoin; here the value of 1 BTC increased by $24 in the span of 5 days. 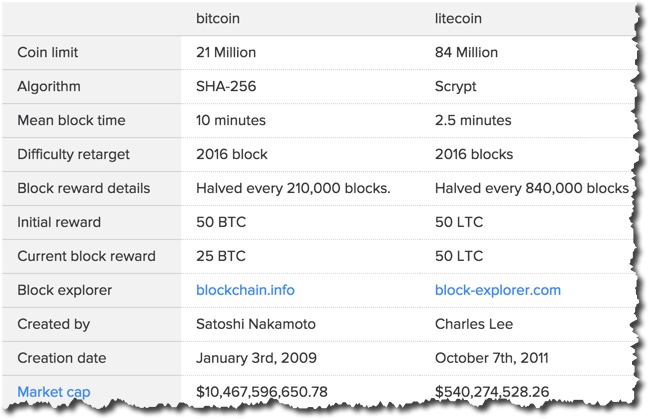 Here Bitcoin is compared with its leading competitor, Litecoin, which boasts faster transaction speeds. However, the “market cap” of Bitcoin shows its supremacy regarding financial backing.

As mentioned earlier, Bitcoin is only one of hundreds of other cryptocurrencies, but it’s also the largest, most secure, and most recognizable of them all.

However it’s also volatile, unregulated, and has a very limited infrastructure for use. Therefore, why should anyone use Bitcoin over traditional forms of exchange? 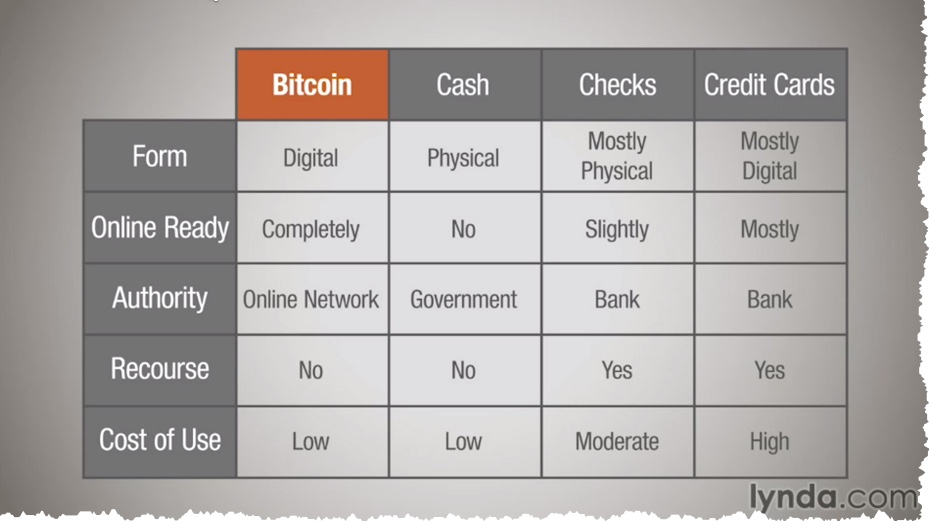 Bitcoin’s speed of transferral and low cost of use make it an ideal currency for transactions sent over the Internet.

People frequently refer to Bitcoin to as digital currency, and as such it’s ideal for online transactions. Unlike cash and credit cards, the Bitcoin network is completely decentralized, meaning it’s like a bank account without a bank.

With no institution to act as the middleman, there are very low costs associated with using Bitcoin. Since there is no bank or government, there is no authority to:

Also, it’s traded internationally; in fact, many people living in unstable economic environments choose to invest their money in Bitcoin as insurance for this precise reason.

There are several downsides to bitcoin. Firstly, there is no way to dispute an exchange when trading in Bitcoin. All transactions are anonymous and untraceable, so there is no recourse for fraud, lost or stolen bitcoins.

A person could fall victim to a scam if they transfer funds and get nothing in return. Alternatively, if someone, like a hacker, gets access to your private key, your account could be drained.

The other main danger is volatility i.e. Bitcoin value can quickly change based on market demand. So, use at your own risk, and my advice is re-read this article and do more research before converting your savings into Bitcoin form (sarcasm font in development), but seriously, do your research.

Additionally, there is no guarantee that Bitcoin will continue to grow and scale to become an important payment network; however Bitcoin has always been in a constant state of maturation and optimization, and should be expected to stay that way for the foreseeable future.

Bitcoin payments are easier, faster, and cheaper than debit or credit card purchases and don’t require a merchant account. Payments are sent and received through the use of a “wallet” application. These apps can be hosted on the web, your computer, smartphone, or dedicated hardware.

Your wallet is essentially a virtual bank account stored online; only it’s not backed up by the FDIC. Check out bitcoin.org to learn more about cryptocurrency wallet applications.

Here is an example of a bitcoin “wallet” — software called MultiBit. The authenticity of each transaction is protected by digital signatures corresponding to the sending addresses, allowing all users to have full control over sending bitcoins from their Bitcoin addresses.

How do you acquire Bitcoins to spend, send, or save? Once your wallet is set up, you can go online to obtain Bitcoins through exchanges, individual trading, or using specialized hardware for mining. There are already a plethora of reputable Bitcoin exchanges established across the Internet, such as Bitstamp, Bitfinex, and Coinbase, to name a few.

Where to Use Bitcoin?

Common criticisms of Bitcoin are it’s limited audience and infrastructure. Nonetheless, there are still more than 21,000 online retailers that accept Bitcoin as a viable form of currency, including:

On average, there are over 100,000 transactions that use Bitcoin every single day, and that number is expected to increase exponentially as the Bitcoin network becomes more widely accepted. 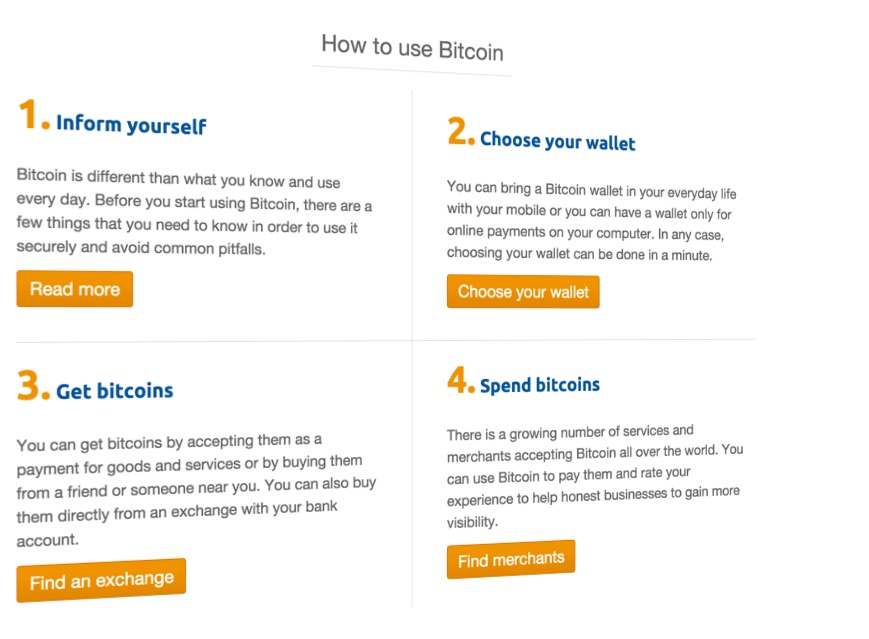 If you’re a business owner and skeptical about using Bitcoin, keep in mind some of the benefits you can experience from taking part in this groundbreaking new currency. 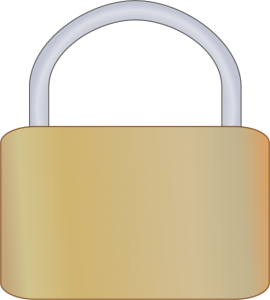 Since there are no chargebacks, there are no costly fees associated with payment disputes, but it also means that payments are 100% final.

Bitcoin can be delivered almost instantaneously, providing an enormous improvement over credit card purchases, and finally Bitcoin can be transferred internationally with ease.

For an increasingly global workforce, Bitcoin can make all the difference when doing business at home or abroad.